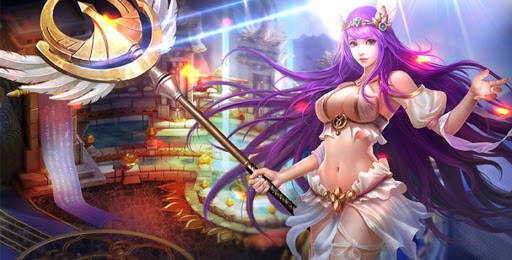 The game was released in mid-2016 and has since been regularly updated with a whole lot of month-long events—a great deal of more content and fresh daily challenges. Omega Zodiac game is converted from Flash to Html5 to get better gaming performance.

The game is known for having a ton of upgradeable in-game items and a very long, time-consuming story for the players to follow. The game is set around the old Greek and Scandinavian myths.

So, let’s explore the world of the Omega Zodiac game and see how it delivers on such an ambitious premise.

Omega Zodiac starts off beautifully with a neat tutorial that allows the players to play through the basic elements of the game and learn about the basic in-game play mechanics.

The tutorial style play here in the game allows the player to easily navigate through the different game mechanics—which are extremely easy to follow.

Here, little information about the in-game mechanics is scattered across the gameplay, where the player is given a brief short popup about the relevant mechanics that they are about to use for the first time.

Yes, there is no dedicated tutorial mode for the player to follow through, unless we consider the first part of the game where we fend of the demons and start our long quest, but other than that, the player learns about the play mechanics and about the basic game mechanics of the world by playing through different sections in the game.

This makes the Omega Zodiac game a whole lot more digestible than most other MMORPG’s where there is just too much information for the player to go through, and all of it is just thrown onto the player at the same time.

This just overwhelms new players and makes it harder for any inexperienced player to enjoy or even play the game without going through the long and arduous learning curve.

After playing through the base area, which is extremely simple for an MMORPG, any type of player, new or a veteran MMORPG gamer, will have an incredibly easy time going through the world of Omega Zodiac and immediately master the game elements and just have a good time playing the game.

And to add, getting a basic grasp of the notable game elements is just soo easy that even someone who has never played any MMORPG before will be able to get a basic understanding of the game design and much more when they are done with it.

Omega Zodiac, as mentioned before, is set in a Greek, Scandinavian based mythic world, but the game has its own unique, very MMORPG like take on the old European pantheons. Here, as the royal guard of Athena, the player is tasked with saving the Goddess of War and Wisdom Athena and recovering the Holy garment.

The realm of gods, it seems, is being attacked by the dark shadow, virtually the dark forces or, more so, the demons, and it is the player’s job to stop them. And in doing so, go through different realms and save the world from ultimate destruction.

As the chosen one, the player has the option to choose from 3 main characters at the start of the game.

The playable characters in Omega Zodiac or more so the three main classes the players can choose from are, The Headstrong Knight,

And the Brave Archer.

To Omega Zodiac’s credit, all the characters have surprisingly great introduction videos, which are highly recommended. And just make each of the cool character designs stand out with even cooler character animations.

But all is not good, as sadly, the characters in the game that go with each class are basically set. There are no character customization options. So, one cannot spend a lot of time customizing their favorite persona in Omega Zodiac, and even the class genders are locked, which is a huge bummer.

But the game makes up for the caveats with quite pleasing and thoughtful characters, where each class looks incredibly well designed and aesthetic, to say the least And the main characters are not the only ones that have a great design.

All the NPC’s in each area have been crafted well, where the developers have taken the character art to the next level. Although there are many similarly designed recurring characters in Omega Zodiac but that only extends to the normal NPC’s where the difference does not matter all that much.

But the highlights of the game, the gods themselves, have been individually designed and resemble their persona just like they have been depicted in the pop culture.

Moreover, the main difference between each class except their character designs are their abilities. As one would expect, the Knight has a lot of stamina and strength, where the Mage, although lacks in those two abilities, but makes up for those weaknesses with his intelligence and more speed.

The Archer tops even top the speed of the Mage and has a balance in strength and stamina with just base level intelligence. And because of these ability differences, each of the characters has an incredibly different playstyle.

So, you can be sure to have a varied play among the different classes, which adds more diversity to Omega Zodiac and makes the game just better.

Omega Zodiac game is quite the title that provides a thorough and enjoyable, simple MMORPG gaming experience in the ancient world inspired by the old European mythos.

The games simple execution to guide the players through different aspects of the gameplay makes Omega Zodiac not only a very unique title, but its eye-catching character art makes it a very unique gaming experience in that.

Although being a free to play browser game limits the game in a lot of ways, but even so with a whole lot of in-game cash options, the developers have somehow made the game enjoyable even with all the grind that MMPRPG’s are notorious for in the most creative possible.