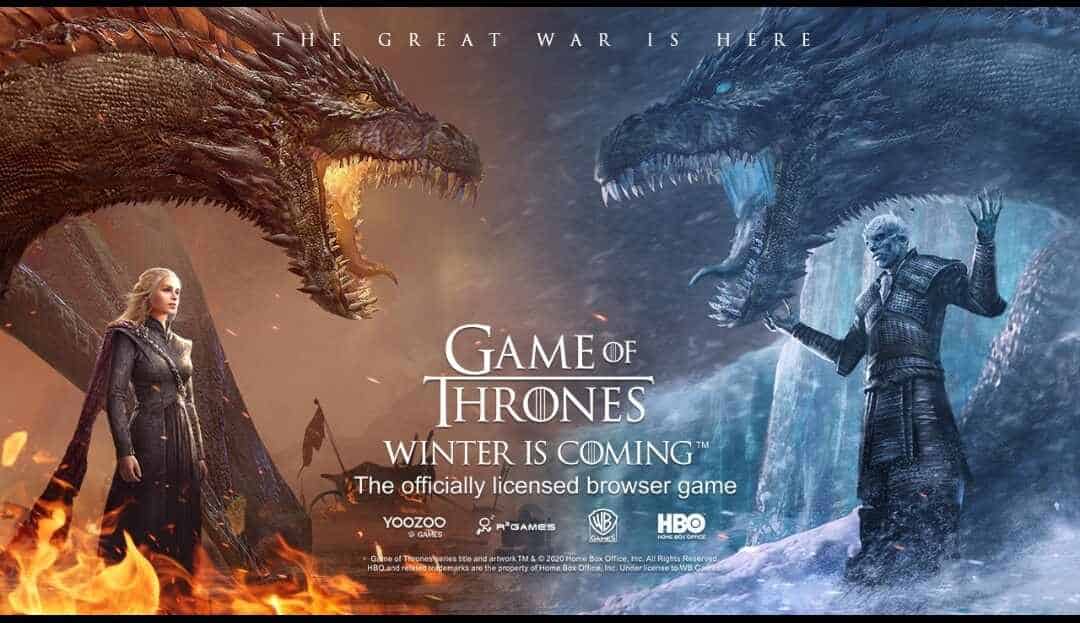 Finally! Game of Thrones: Winter is coming game has the official release on a global Online game publisher, R2games.

First of all, I am a huge fan of the Game of Thrones series. And I have to thank R2games who released this game on its global platform.

Yes! Now You can play with your favorite game of thrones character on your browser without downloading the game.

Now, first let’s talk about the Game of Thrones Winter is Coming game review, features, and how to play.

About the Game of Thrones Winter is Coming Game

The Game Of Thrones: Winter is coming is a balanced combination of strategy and roleplaying PC game. That is based on the HBO series, officially licensed by Warner Bros.

In the game, You have to play the role of an ambitious Westeros lord to determined and save a people plagued by war. Also, you have to put a stop to the endless disputes between the Seven Kingdoms.

To build your base and expand your territory with recruit characters from the show.

So train your army now and make history!

Features of the Game of Thrones Winter is Coming game

Here are the amazing features of this game that give you the Reasons to Play Game of Thrones Winter is Coming on R2Games.

Dive into the world of Westeros

The game has been crafted and designed to recreate a geographically accurate version of Westeros.

Sit on the Iron Throne: Party up with your companions and raise a military to rival different lords over the palaces across Westeros.

The game comes with all the major castles from the show. In the end, your journey is to sit on the Iron Throne and become the leader of Westeros.

Remember the story of Westeros: Interact with events from the show. It’s Down to You: Will you cut down those who look to betray you? Or conquer cities and rule over vast lands?

Meet all your favorite characters

This is my favorite feature of the game. You can play as your favorite character from the TV Show.

You can use Commanders with their attributes, ranks, guards, and armies to Forge your path and progress. Also, Check and use their unique skills in battle.

My personal favorites are Jon Snow and Arya Stark.

Let me tell your favorite characters from GOT in the Comment Box.

Expand your territory and build your base

In the game, you can customize your castle and add an array of different areas with including a variety of various regions with their particular highlights, and moves up to assist you with building your kingdom.

You can explore a vast and varied recreation of Westeros with over 30 different territory and climate types in an ever-changing world.

Here you have to battle among 10,000 other players that come from all over the world and won kingdoms across Westeros.

So first Select your commanders, set your battle formation to use their abilities, and complete missions in both PvE and PvP to See the story unfold again and unlock a wide variety of PvE missions.

A key feature of GOT: Winter is Coming Game

The best and key feature of this game is you can play whenever and wherever you want. Not need to download or install. Simply go to the R2games website, log in with your account, and simply click on the play button to play the game.

How to play Game of Thrones: Winter is Coming Game?

Here is the step by step tutorial to play GOT WC on your PC for free and without download or install.

Step: 1 First, Go to the R2Games and Sign Up for Free or login through your email.

Step: 2 Search the Game or Direct Go to The Official page of Game of Thrones Winter is Coming Game.

Step: 3 Now, Click on the Play Button to Start your Journey in the game.

R2Games is a global online game publisher that delivers microtransaction based, free-to-play browser and mobile games to markets around the world.

That’s it. This is a review of Game of Thrones: Winter is coming game.

I hope you like the game and played with me.

Stay with me because in the future I will give away so many game items.