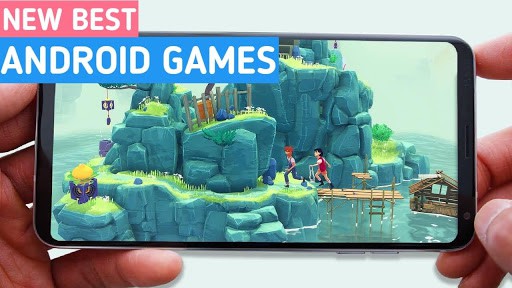 Hello gamers, Sorry for the Late. Here I am back with the best Android games to download in 2020. Nowadays there is no source found who gave us information about the best android games in 2020.

When I search on google what is the best game for android? what are the best free offline games for android? Does it show the article of 2019 and those games are old? So last week, I make the decision to search For the new best android games that are launch in 2020.

So here is the list of 15 New Best Android Games of 2020. Some best android games Offline and others need an internet connection.

I divided this games into two parts:

Now tight your seat and let’s dive into the best android games list.

Don Zombie is an Action Shooter game where you get your gun ready and start shooting at the zombies.

In a world riddle by the zombies, the infection has taken over and it looks unstoppable. But Don, a former Colonel, will not give up until he clears every zombie in the city.

In-game features like you can use an arsenal of guns, explosives, traps, and vehicles to destroy the zombie, over 100 levels, practice mode to learn new skills, daily Challenges with great rewards, and a character himself.

I think this is a best android games Offline for Fun.

This is the second chapter of Demons Never Lie. This is a creepy adventure with fantastic plot twists. In-game Peter and an emo teenager who will now face his destiny. Help him to make decisions and save his life.

Experience this horror game with a great, funny, dark, and unexpected storyline. If you haven’t played the first chapter yet, don’t wait any longer and install it, it’s free! I think this is the best android game Offline for download.

This is a drifting game where you will experience the ultimate highway drifting.

In addition, you can choose your favorite car and start your thrilling drifting experience passing by traffic cars and enjoy the near-miss thrill with big trucks.

In features, the game has next-gen graphics with optional HD mode, classic cars like muscle cars and sports cars. So if you want to play an open-world game on Your Android this might be a nice choice.

It’s a casual arcade shooter game, where you play the role of a spy whose objective is to save the world from all kinds of evil.

His main enemy is dr. evil, who has a plan to destroy the world by unleashing a massive strike of nuclear warheads. You will fight with various types of enemies and bosses.

There are also huge categories of arsenal weapons, also the graphics of the game is beautiful and the controls are accurate. You can shoot, cover, and take action to save the world.

Ultimate Spider Simulator 2 is an open-world realistic Adventure game for Android, where you take on the life of the most realistic spider ever!

In-game you have to play as a Spider and Explore a macro-scale world with realistic insects and animals alike. You can find other spiders and raise your family, make webs, hunt for food, and become the strongest Spider Family in the Forest!

In-game features like a most detailed animal simulator, Create webbing anywhere, a new battle system to fight, a new relationship system to build deeper bonds, customized your spider, upgrade states and skills in the forest, and easy Control with realistic graphics make this game worth buying.

YOU MUST READ THIS

Gladiator Glory is an addictive action game, where you can play with the best clans of gladiators.

This is a unique strategy game where you can show your skills and use a tactically adventitious war strategy to beat your enemies. Some of them could be iron-strong as gods. To defeat them, Level-up your characteristics, and evolve into the best warrior in the Roman Empire and prove your ability to win.

Achieve the top of the Olympus and Be a real conqueror of glory!

This is a roguelike action platformer game inspired by Metroidvania style games.

Where player controls massive cells that occupy control the body of a deceased prisoner and the start of each game as they explore a series of dungeons and fight the creatures within you collect weapons skins and abilities.

Some enemies will also drop selves when defeated, which can be used to obtain permanent power-ups. This is a very popular game on console switch ps4, PC, and now it is also available for Android.

TEGRA is a Survival Shooter Game with great graphics and a fascinating Story, where you have to shoot off hordes of monsters and zombies from another world.

This is a Unique original survival game where the player is the chosen person who is designed to balance the worlds and prevent the full conquer into our world.

In-game features like a variety of weapons, unique crafting and building systems, a fascinating Storyline, Unique diverse levels, and Interactivity of the world with the environment make this type of game the best Android Games in 2020.

Blade Of God is an indie hardcore 3d action mobile game, where the game focuses on exciting combat and level design which like the prince of Persia and god of wars.

During this adventure, you will find many different enemies. The game has a multi-camera system – immersive gameplay with a fascinating storyline and its battle system includes QuickTime event, perfect dodge throwing, melting monsters, and combos provide an experience just like console gaming.

The game requires a minimum of 2GB RAM. They provide some chapters for free to play after that You can make a one-time payment to unlock the rest Game.

Cyber Fortress is a multiplayer battle royal online and offline game in the world of cyberpunk to be the legend of the cyber world.

In-game a huge battleground in a distant desert, new modes: solo, duo. You have to survive from these buildings in this jungle and Collect loot, look for rivals, build defenses.

In-game features like simple controls as well as special abilities for survival, real battleground, huge map, variety of game modes like Solo mode, team battle, squad mode, due mode. Here you get a cool character with unique abilities and an arsenal of cyberweapons.

Here is the best multiplayer games for android to play with friends.

This is a simulation game where you drive the car on different types of terrain. This is the best android game to play with friends.

In addition, you will be able to pass and cross through both dense forests and fields open terrain and hills mountains and plains roads with perfect asphalt through the city or real off-road.

The game also offers multiplayer mode and allowed you to compete with your friends, there is also a wide range of cars and pickup trucks. You can improve the engine’s body. Online off-road racing has bright and colorful 3d graphics which is very enjoyable.

This is an online third-person shooter game where up to a dozen players go head-to-head in exciting maps full of objects to hide behind.

In addition, you can also perform some cool parkour moves during the match like climbing on the wall, roll, and jump.

The game also features five gorgeous maps with a variety of weapons. Overall the game has good graphics and realistic physics.

SKY : Children of the Light

The sky is an Online open-world game with social adventure to explore the beautifully-animated kingdom.

The story of the game is In Sky, we arrive as the Children of the Light, spreading hope through the desolate kingdom to return fallen Stars to their constellations.

In-game you can Soar and explore 7 dreamlike realms to uncover the mystery, Feel free to express yourself with character customizations, Team up with others to adventure into darker realms, save spirits and uncover ancient treasures and Share gifts of light to show appreciation and grow friendships.

Enjoy a unique musical experience and create harmonies together and Join an ever-expanding world with new upcoming seasonal events and expansion of realms.

Sonic At the Olympic

This is an official mobile game of the Olympic Games Tokyo 2020 where you play the different types of Olympic Games with your favorite character Sonic.

The game has a wacky physics mechanism with tons of color. Its light-hearted end gives you the impression of different iconic Olympic Games. The controls are simple and the graphics are decent.

You can explore the city of Tokyo and compete in Olympic Games events, win medals, and challenge bosses.

Here you can Challenge friends and players around the world and Compete in 15 Olympic Games events to enjoy the game. This is the best Olympic game for android.

Minecraft Earth is a Real-time Adventure based on a real AI System to Create, explore, and survive in the real world.

With the AI of the game, you can Fill the backyard with Muddy Pigs, Host the perfect pixel party, and craft some compact cuteness Or build something a bit more heavy metal.

Minecraft Earth lets you tell your own stories and You can even up-scale an epic fish fail. So grab your friends and explore an unbelievable world our own and Discover new dimensions to your creativity with Minecraft Earth.

Which games are best for Android?

That’s it for today. If you enjoy this share it with your game lover friends it makes me motivated.

Now tell me which was your favorite game? Let us know your best game for Android in the comments down below.

You can also give me suggestions about games and follow me on social media for a personal talk.

Thanks for Supporting
See you soon