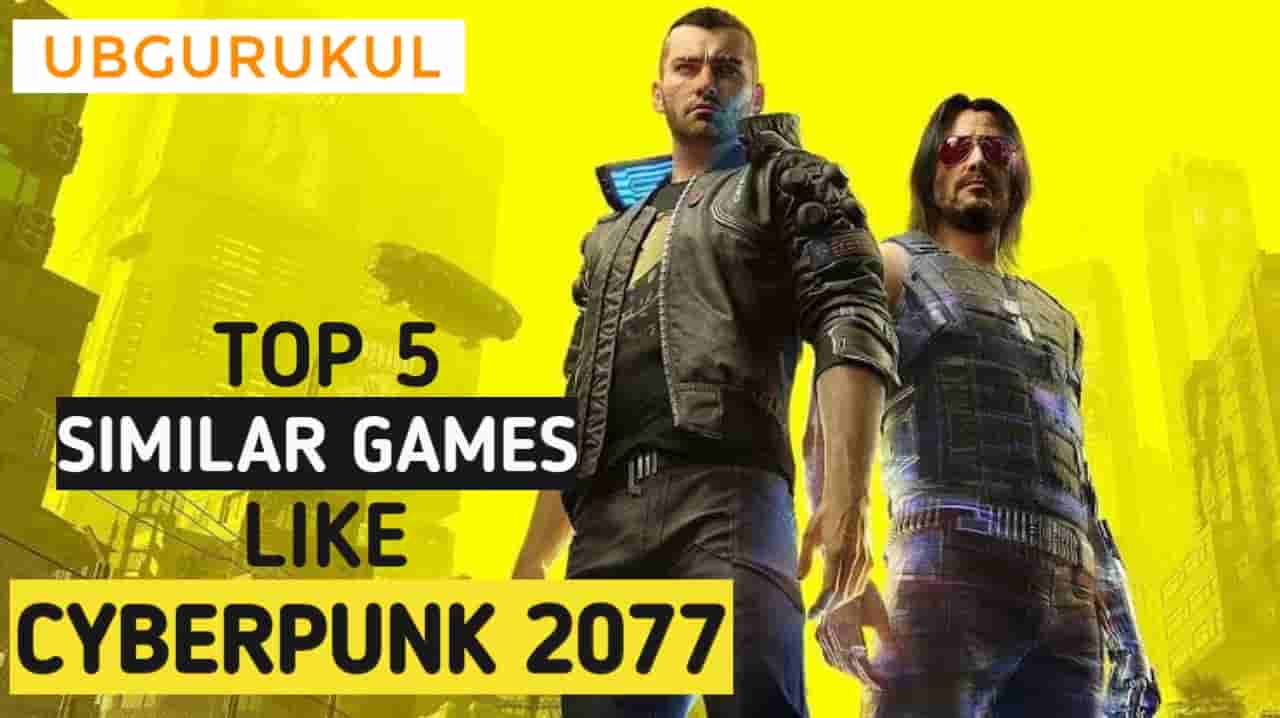 Hello gamers, welcome to ubgurukul. My name is Uday Balasara. Here is the list of Top 5 Best Similar Games like Cyberpunk 2077 for PC Free and Laptop.

Yes, I know we all are eagerly waiting for Cyberpunk 2077 release. But it is delayed every time. So gamers are looking forward to Play Cyberpunk Games before the release of Cyberpunk 2077.

Jooble is a job search engine created for a single purpose: To help you find the job of your dreams!

This is a Fourth Part in the Deus EX Series. The gameplay Features combat and exploration in environments connected to Prague.

The game story is based on Human Revolution in 2029 when the world divided and normal humans become augmentations. The main character Adam Jensen is an agent for the hacker group.

Deus Ex mankind, gives the strong gameplay blueprint of choice-driven stealth RPG gameplay that defines the series but its superlative map and mission designs elevate it to new highs.

Also, the hand full of powerful new augments range from an arm-mounted blade launcher to an omnidirectional propulsion system and the thoughtfully crafted environments help bring out their true potential for instance.

So you should have to try this best similar Cyberpunk game like Cyberpunk 2077 at least one In your life.

Mass Effect Andromeda is a Third-Person Action Role-playing Shooter game like Cyberpunk 2077. The game is developed by Bioware and published by Electronic Arts on 21 March 2017.

The game is set in the 29th century Andromeda galaxy, where you have to choose the role of either Scott or Sara Ryder. The game is run according to the Player by assign any skills that they want and build towards a specialty of the game.

The game has a greater story and gameplay. Of course, the game is set far more in the future than Cyberpunk 2077, But you can easily find vibes of the Night City – futuristic bars with Cyberpunk-like characters or entire space stations harboring shady dealers with their shady businesses.

This article features the list of best new offline games for android without internet.

This is a First-person shooter RPG game, meaning that you will be tasked to do different quests and by doing so shoot various guns – those you can modify and make them more powerful and convert your enemies to blobs of guts and feces more easily.

The game has found a path in the space between Bethesda and Bioware. It’s considering the great new RPGs. It’s not a big open-world game like cyberpunk 2077 but it has a large portion of conflicts and flexible quests.

The game is set in the future and it is not quite big. Different planets, the combat character and companion systems different cities, and bloodthirsty adversaries will definitely entertain you. So download now these Games like Cyberpunk 2077 for PC.

Cloudpunk is an adventure Cyberpunk game Similar to Cyberpunk 2077. The game is developed by ION Lands and released on April 23, 2020.

It’s a cool game built on a voxel engine, set in a cyberpunk world. Essentially you’re delivering illegal stuff in a flying car. This is beyond fun.

You play as a newcomer from the first night. The game is filled with Shady characters and situations in the long night. Flying your hovercar is the most involved in its functions. However, parking locations mean you spend half your time on foot, which is much less enjoyable than flying.

A fixed camera angle went on foot and erratic camera swings can disrupt navigation. You’ll be given a moral choice on how to complete the mission. So I often felt the results had little to do with Ryan.

You have to develop a strategy for solving the level and ultimately also show the appropriate skills. The story begins with the fact that we have to free the architect from prison in that his mind was stuck by his adversaries afterward he tries to repair us at the mentioned course level.

This is a mirror’s edge game with a samurai sword that sounds like fun. The slicing is done with physics, one hit one kill. It’s incredibly fast-paced and it takes place in a post-apocalyptic cyberpunk world that exists inside a tower on a basically destroyed earth.

The features like fast-paced hack and slash, weapons customization and upgrades, detailed graphics in every element, and the future cyberpunk world make this best similar games like cyberpunk 2077.

Watch Dogs Legion is a 2020 open-world action-adventure game developed by Toronto studio and published by Ubisoft on 29 October 2020.

It’s really enjoyable and probably the best watchdogs series game. You start as part of Deadsec an underground hacking collective set to bring back London to some kind of normality. As a gamer, we wanted more uniqueness and some deeper character development as seen in the previous watchdog’s games.

In the final mission, you have to take down various leaders looking to gain their own profit from the city. The roughly 8 to 12-hour main story is short and it can get repetitive towards the end and a lot of the missions are similar. Overall, the legion is one of the best games set in London, Along with Saturn’s creed and the getaway. So enjoy it.

That’s it, these the best Similar Games like Cyberpunk 2077 for PC.

Now tell me, Which was your favorite game? Let us know your favorite PC best similar games like Cyberpunk 2077 in the comments down below.

We will see you next time, stay happy and healthy.
Uday Balasara,
Ubgurukul.