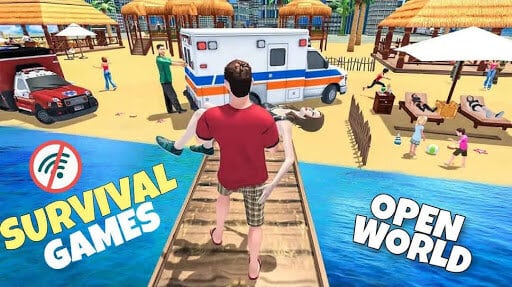 Survival games have exploded over the past few years. The store charts are filled with all kinds of examples. But you don’t need to find the best Survival games because here is the list of best open world Survival games in Android 2021

So without wasting any time let’s dive into this.

This all games are offline and don’t need any internet connection. Some games you can play online also.

Escapists 2 is a strategy role-playing Survival game and it is a sequel to The Escapist 2015. This game is provided by Team 17 Digital Limited.

In the game, players assume control of an inmate(prisoner) from a top-down perspective. Here you get to experience a life behind bars and barbed wire fences of an inmate.

The inmate must follow daily routines in the prison while at the same time complete quests for fellow inmates and seek out opportunities to escape the Prison.

The Escapist 2 features a crafting system that allows players to craft items like shovels, tasers, and dummies to confuse guards.

Other features like Addictive prison simulator game, Over 6 themed prisons, graphics are great and Controls make this game easy to play.

The game starts in a virtually generated world. Players starting out with a few basic tools to get them started.

The game offers Multiplayer mode to play with up to 7 friends on Local Wifi or Online, Brand new controls and User Interface, Over 300 enemies, 15 Bosses, and Events to truly test the player’s skills.

Over 20 Biomes and Mini-Biomes to explore, New Expert Mode, 20 NPCs, and more than 800 new items to discover.

The game was initially released for Microsoft Windows and has since been released for other PC, consoles, handhelds, and mobile platforms.

Mudrunner is an ultimate open-world off-roading game developed by Focus Home Interactive. I know you guys think that this is an off-road racing game, not a survival game.

But you can watch the trailer, here you get ultimate off-road experience, dynamic day-night cycles, 15 immersive environments with 6 sandbox maps and 9 challenge maps, and realistic graphics and different types of the mission will give you Survival Experience.

I am truly waiting for this game to launch and I want to play this game.

In Gameplay, You have escaped from Smiling-x and Help resistance to organized against dangerous enemies from Corporation X, new evil Robots, Cyborgs. You have to Recruit more people to fight against Corporation X.

In the game, you have to solve the puzzles, play in ghost mode to Survival and escape game, and Don’t forget to rescue your teammates.

The graphics are very good and the controls are great. You should download this game at least once.

The game challenges you to control a character that’s trying to survive in an open build and craft system. Build and Craft to collect elements that can help you build structures, dig caves, and create defense mechanisms in order to protect yourself.

X survive are pretty outstanding Free Survival game. The controls are not difficult to manage. The graphics are decent. You can easily download this game from Google PlayStore.

Antarctica 88 is an amazing horror game developed by Euphoria Horror Games with a terrible sci-fi story.

The game takes place at the station Antarctica one, where you have to figure out what happened there and solve puzzles, explore the area, collect and use objects to get out of Antarctica ice alive.

The game offers an exciting storyline with multiple endings with several types of monsters and weapons. You can easily immerse yourself in a while.

You should try this game at least once.

Desert Skies is an offline Open World Survival game available for Android. This game is offered by Playdarium.

It’s a wonderful concept open-world sandbox game, where you craft your weapon to kill monsters in the desert.

But here’s a twist,
players should take care of their health from different perspectives like water, food, etc. Players have only a hot air balloon raft, which helps you defend yourself from monsters in the desert.

Game has nice and clean graphics but control are not so good.

Ocean is Home is an offline Open-world survival game, offered by

In gameplay, you have to live the life of a man who has got on a deserted island. You will have to appear for food, build a house, assembling, and crafting things necessary for all times.

Your only goal is to survive. You can use mine wood and use it to craft items for the construction of houses, weapons for hunting animals, tools for fishing, water extraction, electricity, and plenty of other things.

You can explore the island by car and boat. By looking at a perspective the graphics are decent and controls are good.

Radiation Island is a survival crafting game not unlike Minecraft elongated it’s a first-person open-world wilderness and zombie survival simulation.

The story is that you wake up on a mysterious island that was occupied by Japanese forces in the 1940s visually. This game is an absolute stunner made a game that pushes mobile devices to the limits.

Here you have to Survive on the island and kill the Zombie to save your life. You can even swim and dive into the water. The graphics are really impressive.

So these are the best Open World Survival Games in Android Offline.

These all are online best open world survival games in android. So you can play with your friends or compete with the world.

This game challenges you to survive inside an island for 15 days that’s full of danger, hunger, and the animals on the island will definitely make it harder on you.

In addition, you’ll need to collect a bunch of different materials including wood, rock, steel, etc. Which you can use to build basically anything you’d like.

Here you have to Explore the island and find your own way to play the game. Build whatever you want, wherever you want and you only need to survive and take them to become Last man standing.

This time you’ll have to survive in a devastated world, where other survivors are animals and zombies. You can build your own base of operations and start your journey.

Here you can also use the crafting menu to make all kinds of tools and gather the different types of resources by exploring the map.

The graphics of this game is amazing, Gameplay and storyline are great and Controls are Simple.

In the game, you play as the role of Outlander to survive in Dangerous World. Here you have to Settle the Shelter, fight behemoths, craft and upgrade your weapons and Become a genius pioneer of the magic.

Boost local farming and industry, Build an inaccessible shelter to protect your secrets from other pioneers, invent gunpowder, craft your first firearm and Shoot orcs and goblin summoners to Survive.

This game is not compatible with all devices. So check out now with a direct download link.

The Storyline is based on a boy who woke up and realise that he was no longer stay in the familiar room. But comes into a world as beautiful as heaven.

In Gameplay, you get to dive deep into a huge fantasy world and do basically whatever you want the fight against monsters, talk to other players, build all kinds of buildings, explore in Ospital areas, and much more.

You can also move around the utopia origin world and run anywhere and teleport yourself. As well as climb different structures, swim, dive, and even ride different elements.

This game is must have in the list of top survival games android.

L.O.S.T. is a 3d action open-world survival game that offered by war mice.

The Storyline begins with a plane crash on an apparently deserted island and incredibly a few of the passengers survived. Now you’ll control one of the survivors of the mysterious plane crash.

Here you have to survive on an apparently deserted island.

Features of this game like PVE and PVP elements, A Unique Island, Multiplayer Survival game to play with Friends, character development, incredible Graphics, and Easy to use Controls.

In some devices this game not showing on Google Playstore. So you Should check the Direct link.

Life after is an Open-world zombie survival game for Android developed by NetEase Games. This is the best open world survival games in Android.

In the game, players are tasked to survive in the post-apocalyptic virus-infected world by whichever way possible. Additionally, one could even craft their own weapons and build a shelter to protect themselves and survive the day.

Players are tasked to hunt their food and must deal with a variety of scenarios as they scavenge for material to defend off zombies for longer.

High-quality graphic with a great Storyline and Simple to use Controls make this game the best Survival game for Android.

I really hope you enjoyed this top survival games android and if you’re new around here don’t forget to subscribe to Newsletter. It would really mean a lot to me.

Let us know your favorites Open World Survival games on Android in the comments down below.